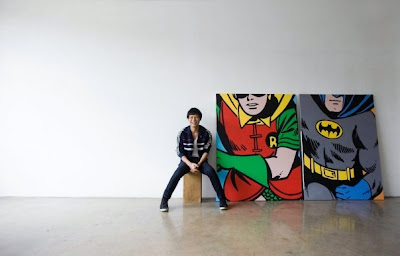 click here to view Andre's artworks - http://andresart.weebly.com/
Like a funnel, Singaporean artist Andre Tan acts as a filter to channel multiple disparate images from all that he sees around him into singular visions upon canvas. Cartoon superheroes, advertising copy and real-life photographs are distilled into attention-grabbing tableaux of the bold and the beautiful, that ultimately find their way into posh homes and condominiums where they function as eye-catching retablos for the worship of mass consumption and popular culture. The irony is not lost on the artist, but his purpose is not so much critique as creative composition: he appropriates images randomly and reinterpretes them using his own colours and aesthetics.He blurs the boudaries between reality and the unreality project projected by the mass culture  and questions our negotiation of self- identity in the context of a mass- media economy that remain largely driven by Western culture.
Welcome to Andre's world of Pop.


Andre Tan obtained his Diploma in Fine Arts (Painting)from Lasalle-SIA College of the Arts, Singapore in 2000.He continued his study at Royal Melbourne Institute of Technology (RMIT) University and obtained Bachelor of Arts in Fine Art with Honors 1st Class in 2004.Later in 2005, he continued study at Lasalle- SIA College of the Arts and obtained his Master of Arts in Fine Arts in 2006.Andre is the recipient of the Judge’s Choice for UTGP08-Kenichiro Mogi Prize (2008, Japan), Studentship Scheme (2005) in Lasalle-SIA College of the Arts, and also received the Georgette Chen Arts Scholarship (1999). Andre’s work is often viewed in relation to the sensibilities of Pop Art, of reproduced images from pop culture, in the commercial style of advertising and mass communication .While his deliberation upon Pop Art’s obsession with the everyday and its critique of popular culture is seen in his selection of content for his work, his focus is less the concerns of commercialism per se as its effects and the reflective process engendered. His artworks are collected by private collectors in Singapore, Indonesia, Japan, Hong Kong, Italy, Australia and UK.